The Fallen: Garfield Students That Did Not Return

Serving in all branches of the military, Garfield students gave their lives so that future generations would remain free. These Garfieldians fought and died in such places as Pearl Harbor, the Philippines, France, the Mediterranean, Suez Canal, Belgium, Germany, Alaska, China, and the skies over Europe and Pacific. Furthermore, with the training being so hard and real, there were those who died here in the United States. They served aboard such ships as the USS Arizona, USS Oklahoma, USS Indianapolis, USS Pensacola, USS Astoria, USS Hull and USS Johnston. They were a part of such battles as Iwo Jima, Okinawa, Guam, Battle of the Bulge, Operation Market Garden, D-Day and so many others. For some of these Garfield students, their bodies were never recovered – never returned.

Mourn the men who died, but we must also
thank God such men lived.
The research is finished and we have listed here the stories of the Garfield students who fell serving their country during WWII.  In doing the research, I came across other Garfield students killed, but whose names were not listed.  The plaque contains 114 names and there are 110 stories told.  Stories behind six of the individuals still remain without enough information, while one name listed, actually passed away 25 after the war.
In some cases, soldiers gave their accounts of what they knew about their comrade's death to those families who lost loved ones.  Usually due to the swirling confusion of combat, the army was unable to document each and every fatality.  Because of this, families would never know the details of that person's final moments.
USN: United States Navy
USCGR: United States Coast Guard
USA: United States Army
USAAF: United States Army Air Force
USMC: United States Marine Corps
PFC: Private First Class
PVT: Private

Other Names on the World War II Plaque

Fidel Acosta, the first name on the plaque, was not killed in WWII. He graduated from Garfield High School in 1941, and did serve in the U.S. Navy during the war. He returned, graduated from East Los Angeles Junior College, went on to get an engineering degree and worked for North American from 1957 to 1958. During the 1960s he was a design engineer for Lockheed, but passed away in 1970.

The following are individuals who are listed on the WWII Plaque, but have only been able to locate limited information on them.  Hopefully at some time in the future, I or another will be able to find their story. 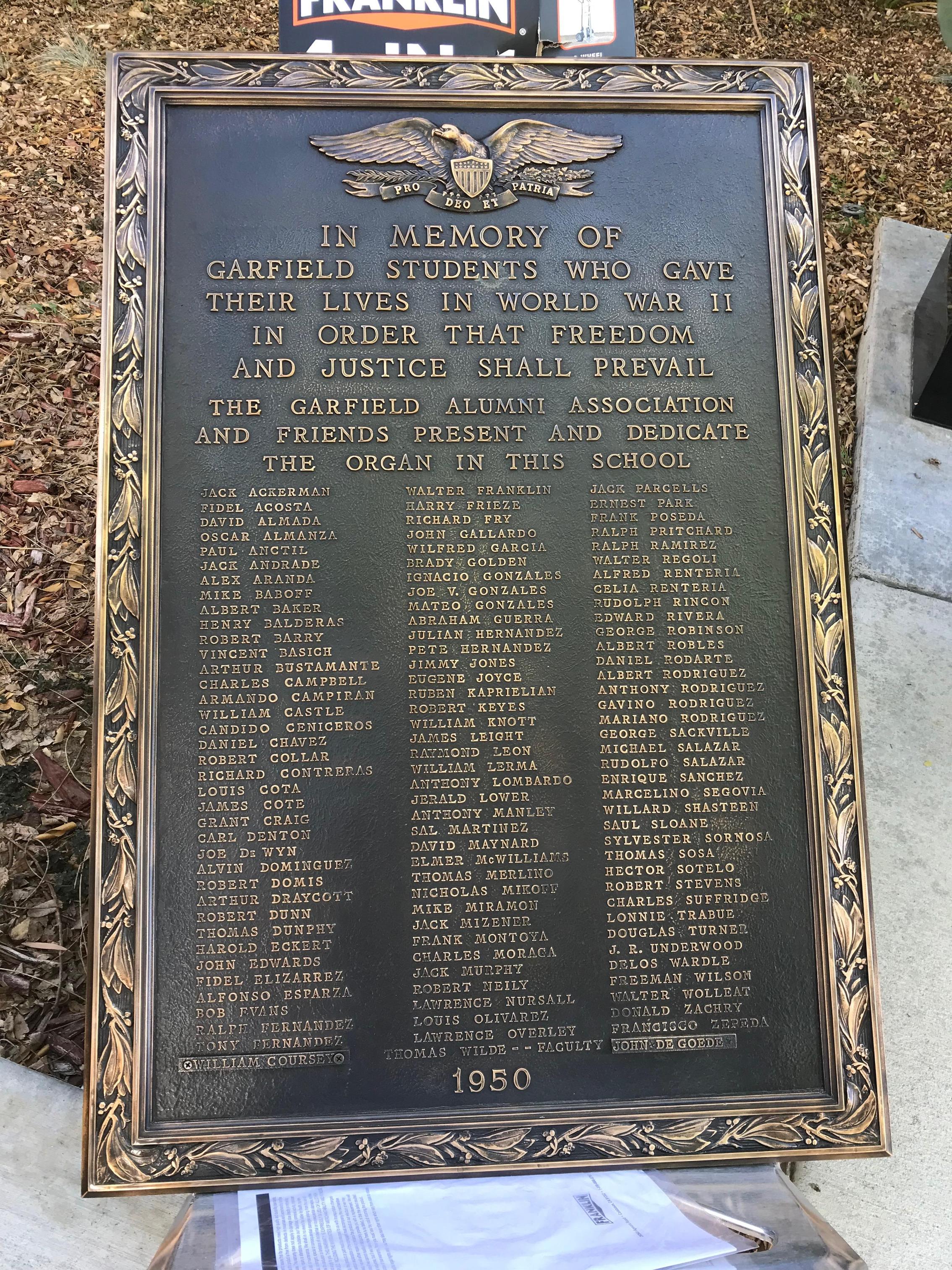 The Memorial to the Garfield students killed in WWII (above).  It was originally in the old main building at the entrance.  Prior to the building being demolished, it was removed and stored.  The Garfield High School Vietnam Veterans had the plaque refurbished and it will eventually be located near the Garfield Vietnam Veterans Memorial.